Ethiopia’s Almaz Ayana has been nominated for yet another sports award following her exploits at the just ended Olympic Games in Rio.

She has keen competitors in the category among others, fellow Olympic gold medalist, South Africa’s Wayde van Niekerk and Formula One World Championship contestant Nico Rosberg.

Ayana was recently named the female World Athlete of the Year at the International Association of Athletics Federation’s Athletics Awards 2016, held at Sporting Monte Carlo. Jamaican Usain Bolt was named winner in the men’s category.

Ayana had a record-breaking 2015. After recording the fastest 10,000m debut in history in June, the Ethiopian went on to win the Olympic title at the distance in a world record of 29:17.45.

She also took bronze in the 5000m event in Rio, her only loss of the year. Having recorded three of the eight fastest times at 5000m, she ended the year as the Diamond Race winner for that discipline. 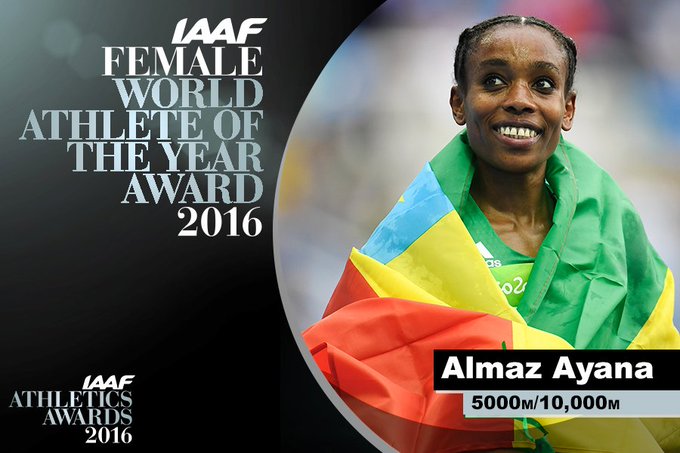 Congratulations to world record holders @WaydeDreamer & @Almaz_Ayana who have been nominated for the #Laureus17 breakthrough award https://twitter.com/LaureusSport/status/819154310105661440 …

Laureus is a global sports-based charity that works to improve the lives of young people. The first Patron of Laureus was Nelson Mandela. It continues to raise funds to support to tackle violence, discrimination and disadvantage.

It’s website quotes President Mandela at the first Laureus World Sports Awards in 2000, as saying: “Sport has the power to change the world. It has the power to unite people in a way that little else does. Sport can awaken hope where there was previously only despair.”

The eventual winners, as voted for by members of the Laureus World Sports Academy, will be revealed in Monaco on February 14.